Burguillos del Cerro has a long history and a cultural heritage of great importance, that has made it deserve the declaration of Bien de Interés Cultural con Categoría de Conjunto Histórico.

The name of Burguillos, diminutive of Burgo, comes from a word of Germanic origin that means small village, city, tower or fortress. The population of the area was composed of numerous and little villages or little burgs, that were scattered through all the territory.

The archaeological sites that exist in the municipal term of Burguillos testify human presence from the Prehistory. We also find remains of Celtic, Roman, Visigothic and Muslim settlements. The reason for these settlements is justified in the clear advantages that the terrain offered in the form of fertile lands, abundance of water, mineral richness and its strategic border situation.

In the beginning of the 13th century, the king Alfonso IX de León, reconquered those territories and granted their government to the Order of the Templars in the year 1228. But it was with Ferdinand III when the effective occupation of the territory was produced, being Burguillos included as encomienda in the Bayliato de Jerez.

After the disbandment of the Order in 1312, the town of Burguillos came to be the domain of successive feudal lords, according to what the Crown agreed.

The king Alfonso XI donated it to D. Alfonso Fernández Coronel, Lord of the Village of Aguilar. Due to the king's marriage with Maria, daughter of the king of Portugal, Burguillos was under the domain of the Portuguese kingdom for some years.

This was the only lord that lived in Burguillos accompanied by his vassals until the day of his death. He commands that his body was buried in the Capilla de la Consolación de la Iglesia de San Juan Bautista. Today, it is part of a more ample group that hosts the Center of Interpretation of the Order of the Templars..

In 1393, the House of Béjar, represented by D. Diego López de Zúñiga, acquires the Lordship of Burguillos. Another important member of this house was Teresa de Zúñiga y Guzmán, founder of the Convento de las Llagas de San Francisco.

Miguel de Cervantes dedicates the first part of Don Quixote to the Duke of Béjar, referring to him as the Lord of the Villages of Capilla, Curiel and Burguillos.

The Lordship of Burguillos persists until the 19th century, when the Courts of Cadiz decree the end of the feudal system in Spain.

In our visit to Burguillos, we will find two well differentiated parts: in the lower and more plain areas we will see the most recent constructions, and as we climb towards the castle, we will go back in history so we can find the remains with more tradition of this village. It is a network of narrow and steep streets, formed by houses that preserve the traditional typology. They have the peculiarity of having adapted to the land by reusing the rock for their construction.

In the plain area we can see manor houses, some of them with heraldry in the facade. Here the streets and spaces are wide and the promenades are landscaped, as in the el Paseo del Cristo y el Paseo de la Fuente Llano.

Starting from this point, looking towards the castle, at the foot of the hill we can see the old Iglesia de Santa María de la Encina, that hosts nowadays the Center of Interpretation of Extremaduran Popular Architecture.
At our backs is placed the Old Hospital of the Franciscans, of the 16th century. 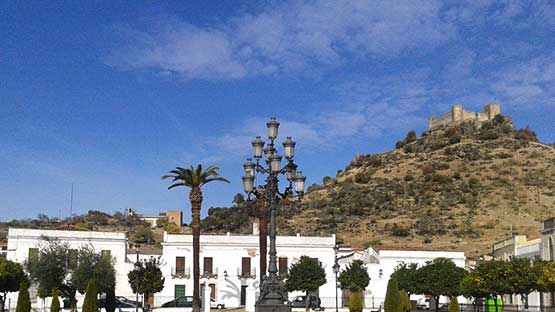 Going to the left of the Promenade, we can see the Plaza del Altozano , where we can find the Convento de la Concepción, current headquarters of the City Council, the Palacio del Obispo Merino Malaguilla, and diverse manor houses.

We will continue through the Pilar Grande Street, arriving to an attractive place, the Plaza de la Misericordia, where it is placed the hermitage that names it.

We continue going up to Zafra Street, one of the olders of the town. At the end of this street we will see one of the crosses that conform another of the singularities of Burguillos: the tradition of the Cruceros o Humilladeros. It consists in the placement of a cross in the town's exits every new century. This tradition has continued since the 15th century. The cross of this street was set in the 16th century. We will find more Cruceros along the route.

We are heading to Plaza Alta through Zafra Street. It was the old center of the population's social life. In this plaza is placed the Casa del Corregidor y Cárcel Real, in which are shown, in permanent expositions, archeological remains found in the municipality, an ethnographic collection and a space dedicated to the mining past of Burguillos, that contains geologic samples from all the world.

In the municipality of Burguillos are areas of great archeological, mining and botanical richness, that has meant the declaration of Place of Scientific Interest to the Mountains of the Cordel and the Mines of Burguillos del Cerro.

The Iglesia de Santa María de la Encina , placed towards the castle, is a building whose origin can be traced to the 13th or 14th centuries and currently hosts the Centro de Interpretación de la Arquitectura Popular Extremeña.

From here we would climb up to the castle through the pedestrian path.
The origins of the castle can be traced back to the Muslim domination period, and has passed through different widenings and modifications during its occupation by the Order of the Templars and successive lordships. 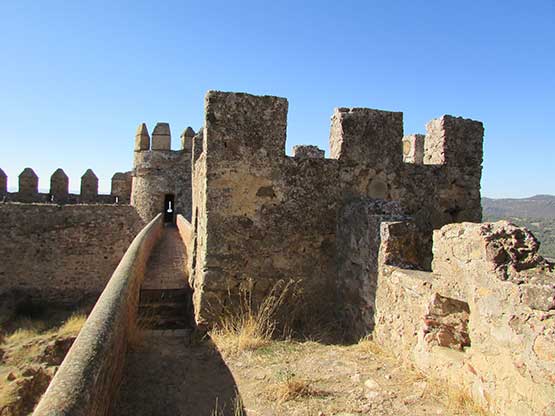 Parapet walk from the Torre Parda of the Castle.

A second route will take us from the Plaza Alta, through San Juan Street, to the Iglesia de San Juan Bautista.

In the middle of San Juan Street we find a house that was property of the Dukes of Béjar. By the end of the street we will see the oldest Crucero of those that compose this tradition.

In this archeological set can be observed different constructive phases corresponding to different periods, from its foundation in the 6th or 7th centuries until its abandonment in the 18th century. Recently restored, it hosts the Center of Interpretation of the Order of the Templars.

We will resume the route going down to the starting point, in the lower part of Burguillos, so we can make a stop in the Parroquia de Santa María de la Encina y San Juan Bautista, of neoclassic style, of which its tower is remarkable, with a clear influence of the Sevillian Baroque.

Already back in the starting point where we met, we must visit the Paseo del Cristo and contemplate the old Ermita de los Mártires, now known as Ermita del Cristo.

We end up inviting the visitor to taste the gastronomic specialties of Burguillos, such as its famous wild asparagus, a great variety of Iberian products and its traditional sweets.
Paseo de la Fuente Llano